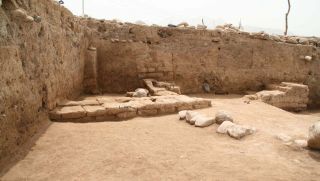 In Iraq, which was once known as Sumer, an aging, bearded archaeologist, Professor Picard, excavates under a rock statue of an ancient Sumerian goddess. The perfectly preserved goddess wears a headdress, she is naked, her breasts prominent. In her hands, she holds what looks like an ankh, she has wings like an angel, and her feet are claws. On either side of her are two owls. Next to the goddess is another statue that has a sword, and jagged teeth with the face of a skeleton, and it has wings. He smiles and nods to himself.
‘This is the one,’ then looks at his skinny, bespectacled, male undergraduate assistant.
‘Sumer was the first civilization you know. But there is a mystery: how did they go from mud hut dwelling fisher folk to pyramid building mathematicians, and so quickly? That is what I hope to find out, mon ami.’
‘If anyone can find out you can, professor,’ replies the sweating assistant. His reputation is legendary. PhDs in archaeology, anthropology, philology, biochemistry, physics, mathematics, and electronics. President of Mensa, consulted by world leaders. Eccentric, but his intellect is unparalleled.
Under the blistering hot sun, the professor uses a brush to wipe away the dust, revealing a stone slab. Then he uses a handkerchief to wipe away the sweat and dust from his face. As the hot desert sun beats down on his back, the professor takes a swig from his water bottle. Along with his young male assistant, they manage to move the slab to reveal a dark chamber.

They struggle through the small entrance and fall heavily onto a stone floor. There is Sumerian cuneiform writing on the ancient stone walls, and in the middle of the chamber is a sarcophagus. The professor studies the writing, running his finger along the cuneiform characters. “Ah oui…oui, ‘The Shining One from the stars—here he rests.’ ” The assistant listens intently as inside the chamber, it is cold, and there is an eerie silence. He shivers and looks at the professor.
’This place gives me the creeps,’ he whispers.
‘Let’s move the top slab,’ gestures the professor.
‘What do you think is inside, Professor?’ asks the assistant almost too afraid to ask.
‘Only one way to find to find out!’
‘Christ, it’s heavy! Here it comes,’ replies his assistant.
They manage to move the slab just enough to reveal what is inside. Professor Picard is shocked at the sight that confronts him. In the sarcophagus lie the mummified remains of an alien creature. It has a large oval head and large eye sockets, where the eyes were. It has long thin arms and legs.
‘Sacre bleu! Sainte Mère de Dieu—it’s not human!’ exclaims the professor.
‘Look at the size of the eyes!’ whispers his assistant. They cross themselves, the professor whispers a prayer, and they edge closer to look at the alien mummy. Professor Picard takes photographs of the ancient writing and mummified alien, while his assistant takes flesh samples from it, being careful not to damage the alien.
‘We can analyse these later, back at the university,’ orders the professor as they make their way out with their equipment. While the assistant loads the gear into their jeep, the professor stands silently looking at the sky.
‘Penny for your thoughts Professor,’ as his young student stands by him.
‘Mon ami, there is a change in the air.’
‘What do you mean, Professor?’
The professor looks at the young man but doesn’t want to frighten him unnecessarily. He needs to talk to his adopted father, his secret protector, from early childhood. He turns and smiles at the curious young man.
‘Take the equipment and samples back to Berkeley. I must travel to Europe, to see an old friend.’

If you are interested in ancient aliens, UFO’s, government conspiracies, vampires, superheroes, ancient legends, the supernatural and ancient history then you should check out my books