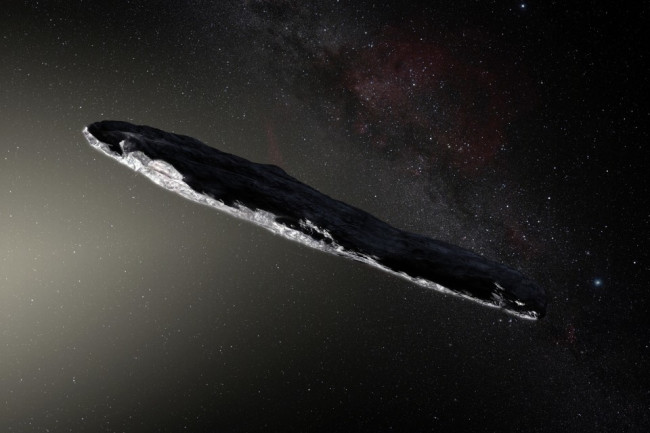 Bulletproof Pete, Lucia the vampire and the rest of the team wait in the darkness below a massive alien ship in the inky blackness above.

DOWNTOWN LOS ANGELES
It is close to midnight. Peter is leading an eight-man team including Vinnie, Handsome Mike, Sebastian, Lucia, Felix and two other vampires, Abel and Arnoldo. A massive black alien ship glistens above them in the darkness, slowly turning and emitting unnerving grinding noises. Vinnie looks up.
‘I wonder if Gill is up there.’
‘Unlikely. I suppose if anything, she would be on board the London ship, but then again, who knows?’ Peter is double-checking their equipment, including the cumbersome nuclear device.
‘Have you got the alien comms device?’
‘Strapped into my rucksack,’ replies Vinnie.
Lucia is tense and focused.
‘Prepare yourselves. Peter, I will carry you, and Felix will take Vinnie seeing as you have so much equipment.’
Pete turns to Vinnie. ‘Just got a coded message from Artie. He’s on top of the NatWest tower ready to strike the London ship. I wished him good luck from both of us.’ Then Peter thinks about Des and the boys.
Peter marshals his team together and looks at his watch again, knowing that precise timing and coordination are critical to success. He reminds his team that they must retain the element of surprise, as around the world, other Special Forces are launching their operations simultaneously. They check their watches. 11:59pm.

Midnight is zero hour.
Everyone is tense, ready for the off.
‘One minute to go. Stand by…’ Peter gets into the zone, his adrenaline pumping through his body.
Suddenly, two men come out of the darkness, Gregg, and Fred. Fred gingerly approaches Peter as Vinnie levels his PR1 pistol at them.
‘Who the fuck, are you?’ asked Peter.
‘Excuse me, we think our women are on that ship.’
‘Are you kidding? We’re starting an operation! Thirty seconds stand by…’ shouts Peter, annoyed.
Vinnie holsters his PR1.
‘Pete, these guys are looking for their women, just like us. Let’s cut them some slack, eh?’
‘What makes you think we can help you?’ asks Peter looking at his watch.
‘You’re going to the ship, aren’t you? asks Fred.
‘Is nothing a secret? Jesus. Lucia, can you find a vampire to carry these two? We go in ten seconds!’ shouts Peter, furious that his operation has been interrupted.
Gregg and Fred pick up some parachutes and are strapped to Abel and Arnoldo. As Peter looks at Gregg and Fred he mutters under his breath, ‘This mission is fucked up already,’ unhappy that their mission may be compromised. But deep down, he knows that he would have done the same. Fred looks up at the ship.
‘How are we going to get to the ship?’
Peter looks at his watch. Midnight.
‘No talking. Go. It’s a GO!’ Peter orders.

The vampires transform, and large leathery wings appear. They carry them all up to the ship in the inky blackness. Fred and Gregg are terrified as they see a red-eyed demon smiling at them. Gregg screams out loud.
Peter is furious, ‘Shut the fuck up, or I will shoot you myself!’
After five minutes, they land on the ledge of the massive black ship. Fred and Gregg shiver against the wind and cold. Vinnie retrieves the comms device and hands it to Lucia. Peter is examining the black panels on the outside of the ship.
‘I’m hoping there is an interface lock here.’
Using his head torch, Peter searches for an interface. He finds one and gestures to Lucia. Vinnie shivers.
‘Hurry up, I’m freezing my bollocks off here.’
Lucia slides back the panel and fits the device. It lights up, and some alien characters appear. She studies the strange language.
‘Let me see now, the professor gave me these codes. The alien language is not so different from Sumeri…that’s it.’
Lucia presses some buttons and a bay door opens into the spaceship. Peter holds up his hand.
‘Quick! Move it.’ They all move in except the two new recruits. Peter shoves Gregg and Fred through the opening as they stumble onto the floor of the ship. Vinnie and Handsome Mike keep a lookout while Peter orders Sebastian to take personal responsibility for Fred and Gregg. Sebastian grabs them both by the scruff of the neck and barks at them in his earthy Geordie accent.
‘You two. I may be a priest, but I’m ex-SAS, and I love these boys as my brothers so if you give us any more trouble I will shoot you. Understood?’ They nod nervously.

The air is musty and stale; the corridors are dimly light and dirty, with cables and wires sticking out everywhere. Vinnie coughs on the air as he keeps lookout. ‘Whoever built this ship had a bad day at the office,’ mutters Vinnie, coughing again.
Peter and Lucia are engrossed in the computer terminal in front of them. ‘Lucia, do you know the layout of these spaceships?’ asks Peter.
‘No. I do not. I shall login and view the schematics. The rest is instinct. I can smell these aliens…’
Lucia uses the device again at the terminal tapping some keys to view the ship’s layout. A diagram pops up which Lucia studies, figuring out their current location and the location of the centre of the ship, translating the Sumeri language in her head.
‘Do you know where the women are being held?’ whispers Fred. Lucia nodded, looking annoyed at the interlopers.
They are taken by surprise, as a robot turns into a corridor towards them. They dive for cover into a storage room. The robot stops at the open bay door, presses some buttons, and the door slides shut. Then it returns to its duties. The team ventures back out to the corridor. Lucia looks at the schematics again.
‘Lucia, any ideas?’
‘Peter, follow me. Stay silent.’
A terrified Fred looks at Lucia.
‘Who, what are you?’
‘My name is Lucia, I am a vampire, our ancient enemy is da aliens da humans seek to destroy. Humans and vampires have now united.’
‘The enemy of my enemy is my friend,’ quips Peter.
‘Well put, Mr. da Bulletproof.’
‘I’m looking for my wife,’ Fred whispers.
‘I will help you. As they say, look for friends in unlikely places,’ says Lucia.
‘Can we crack on!’ says Peter, impatient and still furious.
‘Shall we begin our business, gentlemen?’ says Lucia.
A frightened Gregg looks nervously at Lucia.
‘Whatever you are, I am grateful for your help. I’m scared.’
‘So am I,’ says Fred. Peter is annoyed but sympathetic.
‘I get scared sometimes. It’s natural—shows you’re alive,’ replies Peter scanning the area for alien activity.
Lucia is trying to focus.
‘Silence, please!’
They walk down dark, poorly-lit corridors, some of which seem to be falling apart, either due to lack of maintenance or poor construction. The smell is awful.
‘I think they built these ships in a hurry,’ whispers Peter.
‘Pen and inks as well,’ coughs Vinnie through the stale air.

HOW WOULD A NUCLEAR STRIKE AGAINST AN ALIEN SHIP PAN OUT?